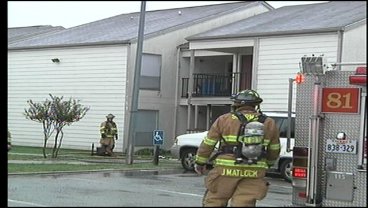 SHERMAN, TX -- Tuesday, an apartment fire in Sherman ultimately took the life of an elderly woman. Now the heroes who tried to save her life are sharing their story with KTEN's Deeda Payton.

The men say it all happened so fast. They saw smoke and knew they had to get inside, and when they saw a woman's body they jumped to action and pulled her out.

"We got a call on the radios they said there was a fire and by the time we got to the apartment there was black smoke coming out of the front and back of the apartment," said maintenance worker, George Anderson.

When the employees saw smoke they said they just reacted. They ran around to the front door, but couldn't get past the locked door, so they ran around here to the back and broke down the door, got inside and that's when they found a woman. "She was about ten feet inside the apartment and I saw she was a little bit on fire and I went in and covered her up, pulled back and started pulling her out and when I got her out I just tried to make sure no one could really see. I didn't want anyone to see her like that," said maintenance worker, Brent Cargal.

The 80-year-old woman died later that night in the burn unit at Parkland Hospital in Dallas. "The medical examiner reported to me that she had extensive burns over 95% of her body," said Sherman Fire Chief, J.J. Jones.

Eventhough this is only the second fire-related death in Sherman in the past two years, Chief Jones says a life a lost is not something his department takes lightly. "Anytime we have a fire that results in an injury or fatality we look back at our own internal programs specifically our fire prevention education programs and ask ourselves what could we have done, how could we have prevented this event."

Thanks to a grant, the Sherman Fire Department is able to participate in a senior fire prevention program. For more information on the tips and tools they provide, call 903-892-7267.