Church Travels to India to Give Medical, Spiritual Assistance 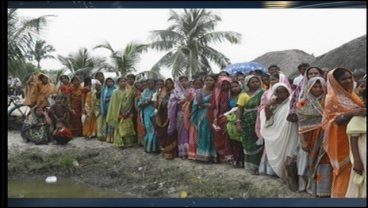 SHERMAN, TX--Getting medical help isn't typically a concern for most Americans, but there are those abroad who aren't as fortunate. A Sherman church group is bringing modern medicine to an island that's in need.

They live their lives at the bottom of society, but one church group in Sherman is flying across the globe to change that.

"This is an island that they've never really heard the word of God," Judy Schwynk said, church member. "They don't know that one God offers them a special gift."

46 Sherman Bible Church members--19 who are medical professionals--left for India Sunday afternoon. They'll be traveling to Ghoramara Island in the Bay of Bengal, but it's not the first visit to the islands for some members.

"From the people who were over where we went last year--giving us back information that really had a profound effect on those people," Doug Myers said, physician.  "So physical needs, emotional needs and spiritual needs."

In November 2009, church members traveled to the Sunderban Islands east of India to give medical assistance and spiritual guidance.  They're doing it again this year, and they're bringing more people.

"Well, one I've never been out of the country for the most part, and I've taken some classes studying their culture," Cody Mygrant said, pre-med student.  "It's going to be good to help a people that actually needs help."

An estimated 6,000 Indians--untouchables, who are members of the lowest Hindu caste--will be helped.

"They're the lowest cast system and so they have no one who cares about them or even has eye contact with them, so we give lot of eye contact, we give lot of smiles," Terri Chapman said, church member.  "We wave to them, we speak to them even they don't know our language."

To go, each traveler is paying out of his or her own pocket.

"Now I have an opportunity to really focus on that, and that just stays with me for a long time after these trips," Myers said.

After being abroad, practicing faith at home could have a new meaning for members.

"I think a lot of kids--hearts--and my heart---bring them home, so i can pray for them," Schwynk said.

Though they're only in India for a few days, members say they expect their memories to last a lifetime.

Sherman Bible Church members say they plan on making the trip to India every year for almost the next decade.