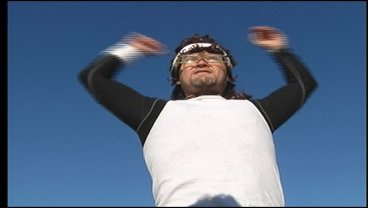 DENISON, TX--Think running a mile is hard? Try it with big hair...or spandex.

"We're uh--not young--So we knew we would have to call on special super powers," Laurie Underwood said, "Wonder Woman."

Laurie Underwood and her friend are Wonder Women. They, and dozens of others, are racing to benefit Big Brothers Big Sisters. For the holiday season, employees from the local fitness center Nautilus decided to have everyone dress up this year. This man tried to be the main character from the movie, "Joe Dirt."

"Try to get the hair to stick up front a little bit more I think," Scotty Voight said, "Joe Dirt." Joe had his hair up like that in the movie, but mine's kind of stayed flat so I just left the headband on there for it."

Voight says the wig and glasses don't slow him down.

"Yes I had some other ones that I thought about using, but with a mile and a half run, I figured it would be a little restrictive, so I thought I'd just kind of go with this," Voight said.

Some thought their costumes could help them win the race.

"I hope it does. It's a little tight so I hope it makes me run faster," Tara Cutler said, "Superwoman."

When picking a costume, others opted for comfort.

"Thief I guess. I threw some black clothes on," Hunter Hames said, "thief." I figured that'd be good. Maybe it'll be dark enough this morning I could sneak past some people.

"It's amazing that a whole bunch of people because I was thinking--you know--8:30 in the morning on Halloween--people are going to get dress on Saturday and Sunday?" Jada Brawner said, Big Brothers Big Sisters Regional Executive Director.

The runners didn't seem to mind breaking a sweat in their odd clothes.

"Yea I know. I was walking out this morning--I was like--I probably really look like I'm going to rob a place or something," Hames said. "I figured I should get up here and make it look someone reasonable. It's Halloween though so, everyone's use to it.

It was a way to help children--with a fewer calories than the candy.