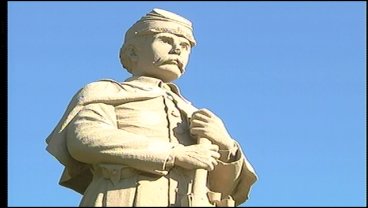 DENISON, TX--During the civil war when the nation was divided, Texas was as well. The descendents of Union Veterans held a ceremony Saturday morning to remember those who lost their lives in battle.

The Sons of Union Veterans of the Civil war held a monument rededication ceremony at Fairview cemetery in Denison. The union soldier statue was erected in 1906 and was recently restored.

"It's not so much that we rub anything in anyone's faces and say, 'we won, or they lost," Jerome Kowalski said, Chaplain. "They were Americans fighting for what they believed in on both sides. No one won this war. America lost."

Sons of the veterans say that north Texas was predominantly union, and that their history shouldn't be forgotten.