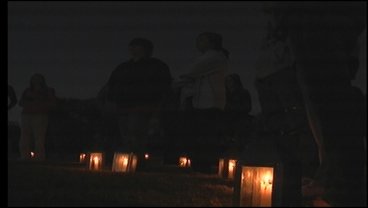 "The stories that I'm going to tell are actual stories that have happened to me and to other people," Steve Abolt said, tour guide and story teller. "Things actually happen during our tours. This is the most haunted spot in the state of Oklahoma."

Whether it is or not--tickets to hear ghost stories at Fort Washita are sold out this year. Ghost seekers--and skeptics--will hear accounts of paranormal encounters at the fort thru Saturday.

"Well, we've heard about it so much that we wanted to see the area and see the stories because every year that I call, they're out," Mary Roach said, Tishomingo resident.

According to Abolt, the Bohanan Cabin is the most active place on the fort. He said for whatever reason, whatever's here, doesn't like women.

The Bohanan Cabin is where the most serious of ghost hunters attempt to spend the night.

Fort Volunteer Tracey Bowers said she used a tape recorder to see if she could collect electronic voice phenomena...what she got was startling.

"And when you listen to the tape, you can clearly hear what appears to be like a child's voice and it's like talking right into the microphone and it clearly says--Pappy-I love all the people," Bowers said.

Bowers said she gave the tape to fort workers.

"Yea it was very eerie--we weren't really necessarily expecting to get anything because you know, you can go into a place and sometimes have nothing happen, but we were really excited to get that," Bowers said.

Tour guide Steve Abolt claims that all of the stories he shares are based on real experiences.

"I always tell people--I say, no one's going to jump out at you with a Jason mask, but if they do, it's real," Abolt said.

With all of the unexplained phenomena, some come to the fort after dark to see for themselves.

To help rebuild Fort Washita, donations can be sent to the fort or the Oklahoma Historical Society.