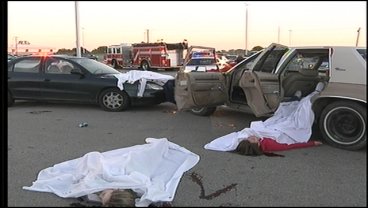 SHERMAN, TX -- High school students in Sherman got a wake up call Thursday morning when they walked on campus. They saw a deadly drunk driving accident in the parking lot. It was staged as a way to create awareness about the dangerous effects of drugs and alcohol. Deeda Payton has the impact it had on students.

It was a gruesome scene, while fake, it set a very real scene of what can and sadly does happen when people drink and drive. Participants believe it will leave its mark on the student body.

Two cars collide head-on. Several high school students are killed. Their friends, who were both driving drunk, ended their wild ride as murderers. No this isn't real, but the point is, it could have been. The gruesome car accident is the first thing many students saw at the high school in Sherman. It was part of the Awareness from the Heart program to make students aware of the dangers of drinking alcohol and driving drunk.

"I think it really did have an impact on the student body as they were walking to class," said Student Council President, Jordyn Herd. Many students looked on in awe questioning what was really going on and others turned away.

Herd played a student killed in the crash. "And they seen me and said that's Jordyn Herd is she dead? Is this real? Are those real dead bodies and then I heard other kids say those are white sheets that's like legit, they're dead."

Others knew it was staged. The school sent out a letter to parents to warn them of the traumatic nature of the program. "I think whether the students are distraught about it or rather they buy into it is really aside either way it's impactful and it raises the awareness for the cause," said David Little the Student Council Advisor.

Some students had seen similar scenes played out at other schools. "It just really made a lasting impact on me and I knew the impact that it would have on our student body," said Student Council Member, Jacob Irvin.

After the staged crash, the students that were killed stayed in character throughout the school day to spread the message that drugs and alcohol can be deadly. "Me and the other driver will have signs, white sign with red letters that say today is the day I killed my friends because of the choices I made I am a murderer," said Irvin.