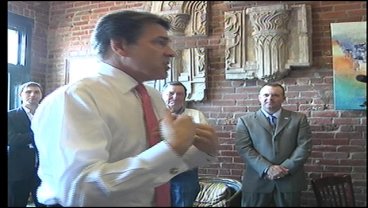 SHERMAN, TX -- A recent Rasmussen poll gives Republican Gov. Rick Perry an 8-point lead over Democratic challenger Bill White.  But it's close enough that Gov. Perry was stumping for votes in Texoma Wednesday for the second time in less than a month.  KTEN's Chris Severy reports.

As expected, Gov. Perry struck a positive note, remaining completely confident he'll win an unprecedented third full term come election day on Tuesday.  Perry entered the Boiler Room coffee shop in Sherman to loud cheers from a large crowd of supporters.  What made this trip different than his last a couple of weeks ago?  There was a lack of Bill White supporters protesting his visit and the appearance of the Governor's wife, Texas First Lady Anita Perry.  She was here to tell voters why she believes her husband is the right choice.  Perry, meanwhile, says he's confident he'll win because of the show of support he's seen across the state.  "In my 20 years of traveling across the state as a statewide elected official I have never seen crowds the size, the passion exhibited as we're seeing today.  People are really excited about going to vote, sending a message to Washington and keeping Texas on track," Perry said.  The Sherman stop was one of several the Governor and First Lady made across Texas on Wednesday.  As for his opponent, I will sit down with Bill White this Saturday, October 30th.  You can watch KTEN News Saturday night at 10 for a look at that interview.  And it will be posted right here on www.kten.com.