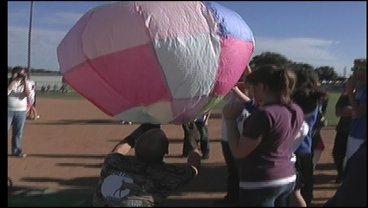 SILO, OK -- Teenagers at Silo Schools learned "If you don't do drugs, the sky's the limit." The students demonstrated the idea by releasing homemade hot air balloons in honor of red ribbon week. Deeda Payton was there for the big event.

Silo High School Students got to show off their handmade hot air balloons to the entire school. The students crafted the balloons in science class while learning the gas laws. Wednesday morning, they got to take the lessons learned in the classroom to the skies.

This was the second annual balloon release in Silo and teachers say they plan to do it again next year.