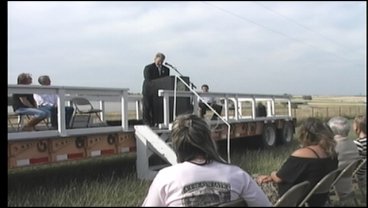 MARSHALL COUNTY,OK--Fallen soldiers in Marshall County from the wars in Iraq and Afghanistan will forever be remembered--thanks to three highway dedications this week.

Corporal Michael Thompson and Chief Warrant Officer Brady Rudulph, both of Texoma, were killed in 2008 when a helicopter they were on went down in Iraq.

Monday afternoon, more than 100 people gathered as Corporal Michael Thompson was honored with a portion of Highway 70 through Kingston, Oklahoma.

"We're so pleased with the way everything's turned out and yeah we're just so proud," said Michael's father Kory Thompson.

"He went over there for our freedom, he believed in everything that he did and I miss him very much," said Michael's mother Angie Perry.

Michael's father Kory Thompson says his son knew both of the other soldiers being honored and he feels it's special that they're connected even after their death.

"Since Michael and Brady were both killed together, Brady's will end on the other side of the bridge and then Michael's picks up on this side of the bridge, goes to 377 where Clint's will pick up," he said. "Him and Clint Williams were such good friends and Clint's goes to the state line. So all of them right here together, it just worked out better than I could've imagined."

For his mother, Angie Perry, the sign will be a constant reminder of her son's sacrifice.

"I'm going to think son, you're a hero. You will always be my hero and you'll never be forgotten," she said.

Sergeant Clint Williams, also from Kingston, was killed by a roadside bomb in Iraq. On the same day Thompson was honored, just down highway 377, Williams' loved ones gathered for his dedication.

"It is quite an honor, you know, he won't ever be forgotten and it just keeps him alive," said Clint's mother Marci Sprouse.

Clint's family says if their son could see the sign today he wouldn't want the recognition for himself.

State Senator Jay Paul Gumm and Representative Sam Buck presented both families with an Oklahoma flag, and a replica of the sign.

Chief Warrant Officer Brady Rudolph's family and friends were honored with his highway dedication at the 69/75 and Highway 70 intersection on Tuesday.