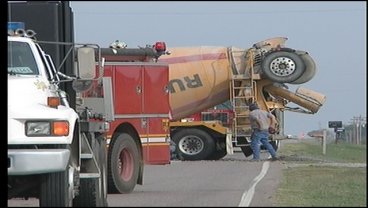 DURANT, OK--From 9:00 AM until almost noon Monday, Oklahoma Highway Patrol and police closed Highway 78 south of Durant because a cement truck had tipped over.

According to witnesses, a trash truck turned north-bound onto the highway, causing the cement truck driver to swerve in order to avoid an accident.

"There was probably 3 or 4 yards of concrete spread out across the roadway and a concrete truck overturned blocking the entire road," Robby Keeling said, Oklahoma Highway Patrol Trooper.

The trucks didn't collide, but according to neighbors, the trash truck driver left the scene. The cement truck driver suffered a concussion and was taken to Texoma Medical Center.

The other driver could be facing misdemeanor charges for failing to report an accident.