Animals Seized From Sherman Property After Found Near Starvation 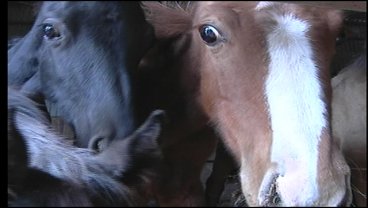 SHERMAN, TX--Authorities seized dozens of animals, after they were discovered to be malnourished. One was even dead on the scene. According to the Grayson County Sheriff's office, the caretaker said he couldn't take care of them because he ran out of money.

An animal lover, Lacy Ball has dogs and cats of her own. Seeing animals emaciated, she said, is heartbreaking.

"Oh I just think these poor horses are just in such terrible condition," Lacy Ball said, Society for the Prevention to Cruelty to Animals spokesperson. "It looks like nobody is taking really good care of them in a long time and they're all just starving and you know, gnawing on wood and gates and anything they can really get their mouths on."

After a man visited the Sherman property Sunday on business, he reported seeing several horses near starvation. Officials visited the property and found two horses dead, and many others death. The Society for the Prevention of Cruelty to Animals seized the 36 horses, 2 goats, and 2 dogs Monday.

"It's been a problem for two years because there's been numerous reports to the sheriff," Katie Hayes said, veterinarian. "The sheriff's been out here for two years. We've told him we need to feed his horses and he just doesn't."

The Grayson County Sheriff's office served a warrant for Rodney Lynn Decker. The suspect could be facing 12 felony counts of cruelty to livestock. He doesn't own all of the animals, but is responsible for their care.

The seized horses will be taken to Perry Animal Care Center in McKinney where they can receive a full evaluation from a veterinarian.

"In here you can see there's no grass on the property," Hayes said. "There's no hay there's no feed you know, there's nothing for these horses to eat."

Hopefully soon, these animals will have a safe place to stay.

Decker was arrested Sunday on unrelated charges. He could be facing additional charges for animal cruelty.