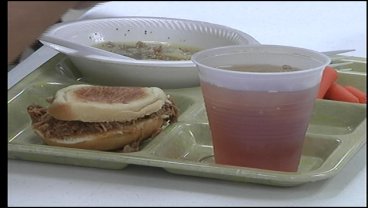 SHERMAN, TX -- Sherman residents are stepping up to help a new soup kitchen. Organizers say they have over 200 volunteers that are serving lunch to the hungry. Deeda Payton reports on the Grand Central Station Dining Car.

Soup, sandwiches and fruit, healthy lunches for hungry people. That's what the new Grand Central Station Dining Car is serving up in Sherman and it's surpassing organizer's expectations. "It's even more, even more. I had no idea it would run as smoothly as it has run. We've had food everyday without having to do grocery shopping. We've had lots of donations," said Volunteer Coordinator, Dorothy McKee.

Mckee opened the soup kitchen less than a month ago and already she says more than 200 people have volunteered their time and countless others have brought in food donations.

Sherman residents say it's an answer to their prayers. "I think it's great. I really do because I've been praying for this for years and now it's come true and I'm so pleased," said Sherman Resident, Daria Ramirez.

The dining car is currently feeding between 20 and 25 people a day and has the capacity to fill the tummies of up to 60 a day. "There's a lot of people that's been needing this help for a long time," said Ramirez.

The Dining Car is open weekdays from ten until two. Lunch is served from eleven until one. Everyone is welcome. No questions asked.