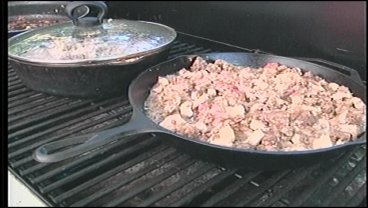 Local cooks competed to see who could stew the best chili. It wasn't exactly an episode of Iron Chef, but the outdoor cookers were hotter than any kitchen.

Their kitchen stadium? the outdoors. They pick their own secret ingredients, competing to see who can cook the best chili.

"The last couple of years it's been pretty tough," Rhonda Davis, Chili Chef. "I think I'm in the running this year. We've got less competition but I've kinda tweeked my recipe a little bit and I think we're going to be doing pretty well."

"Oh they got to try a lot harder than that," Tim Yeary said, last year's Chili Champion. "I mean, them chickens are slow. You know, this beef tastes better."

Tyson cooks say they use beef too, and that they should have won last year's competition.

New chefs have decided to enter the contest this year. One is KTEN's Creative Services Director, and he doesn't seem intimidated.

Several pans were frying at the same time in the KTEN tent--a few with unusual ingredients.

"The lamb--we added lamb [...] Kosher salt, lamb--plenty of tomatoes, course plenty of cumin--we've got some apple cider vinegar which is what we're going to add this year," Miller said. "It's a little different than what most people add."

These chefs are cooking more food than an army can eat--they're doing it for the Texoma Red Cross. They hope to raise almost $50,000 from their chili cook off, motorcycle poker run and silent auction this weekend at Loose Wheels in Denison.

These cooks fight disaster with a few secret ingredients.

"I can't tell you that or--that would not be good. Coors beer," Jerome said.

Who knew that doing something for a good cause could taste so good.

Tyson placed first in the 2010 Ride the Red Chili Cook Off.