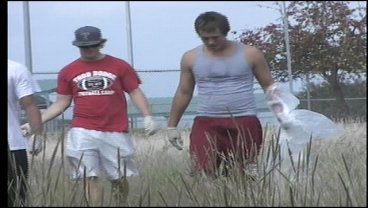 ARDMORE, OK--Though one ardmore football player is injured, it hasn't stopped him from helping his community. He and his teammates are picking up around town. Meredith Saldana reports.

Friday afternoon Ardmore High school football players rallied together on the field... But it wasn't the *football field... It was the grass of regional park in ardmore... They were there...to give back.

"We're just picking up trash trying to help out the community," Rob Nichols, senior football player said. "I mean they give us so much so we've gotta give a little bit back to them."

"I think the community does a lot of stuff for us as far as giving money just their support and things like that and it's something little we can do as a team to come back and just come out here and just pick up trash," Ryan Thomason said, football coach.

It's not often you see Texoma's youth... Helping out around town... It's something that even Ardmore's mayor had to come out and see for himself!

"I couldn't believe it at first, but you know I'm uplifted that our young people want to do something positive," John Moore said, Ardmore Mayor.

The players combed all of regional park, and we even caught some of them helping each other in the process.

Senior Davin Miles was injured playing football, but he didn't let that stop him from supporting his team and the community.

"Athletes in Ardmore district we're the role models to the young kids and they see us doing it then they might want to come out and do it too," Davin Miles said, senior football player.

And coaches say they the event is also teaching these athletes a few lessons.

Rob Nichols tells us it's taught him a valuable lesson.

"Yeah, don't throw out my trash when I'm driving down the road," Nichols said.

While it was hard work, don't let them fool you. These athletes had fun giving back to their community and are even challenging other teams to do the same.

"I think we should actually all do it. I think we all around Ardmore, Oklahoma, Plainview, Dickson, Lone Grove. We should all come together and do stuff like this," Miles said.