Battle of the Ax: Denison's Week in Practice 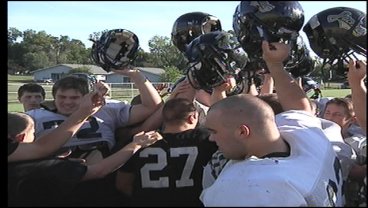 DENISON, TX-- For Denison High School, the Battle of the Ax will definitely be a battle. The Yellow Jackets are 0-7 so far this season, but this week in practice, all records are thrown out the window.

"I think we have pretty good chances, even though we're the underdogs in this game," said Clifton Jackson, the Jacket's quarterback.

And the energy feels a little different for the Jackets this week. "Practice has been keyed up itself. It's hyped and intense and it's just crazy, it's fun. The intensity's picked up," said Dillon Wedel, an offensive lineman.

Denison had a very successful season this year, they actually took home the Battle of the Ax last year, but this is a whole new year, and they've had a pretty rough start. All week in practice, the players say they've been working on intensity and chemistry, and when it comes to the game, they're going to leave it all out on the field, all four quarters of the game.

"The main model is to finish. Finish all four quarters of the game, work hard, and just stay the course," said Jackson. Denison has a young team. Most of the starters from last year graduated, so now the team has to find their rhythm.

"At times, it's a little shaky, but when we come together and the chemistry is good, we have good flashes of great things," said Jackson. The young players are also excited about their first Battle of the Ax, but this year's seniors- they know the drill.

"The first impression of Battle of the Ax is walking out onto the field, and just the crowd going crazy, it kinda makes your chest vibrate, it's fun," said Wedel. "Every game's a game, and this one is special, but we can't let the pressure of it affect us mentally or emotionally," said Cazelle.

But what about those rain chances? "Playing in the rain's gonna be great," said Wedel. The Yellow Jackets also know this game could turn their season around. "Hopefully we're gonna end it on a good note, we're gonna win the next few games after the Battle of the Ax, that's what we're looking forward to," Wedel said.

Rain or shine, expect the Jackets to bring the intensity. "Denison's a special place, so it's the best place to leave it all out there," said Cazelle.