Sherman/Denison Mayors Battle in the Kitchen 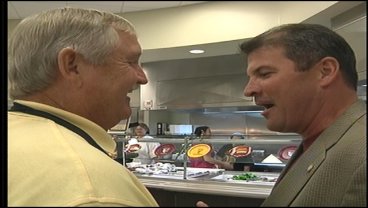 GRAYSON COUNTY, TX -- Let's talk about a competition going on between Sherman and Denison's mayors! it's the Battle of the Ax food style! Deeda Payton reports.

Denison Mayor, Robert Brady, submitted his family recipe for chicken soup while Sherman Mayor, Bill Mager's, entry was family stew. Even though the mayor's didn't actually cook their dishes, that didn't stop them from trash talking. "Mine's much better and the important thing is mine's more healthy. Mine's chicken and his is beef. Course everybody knows chicken's more healthier than beer so I'm sure we'll win out," said Mayor Brady. "I think all that needs to be said is the mayor of Denison served up some chicken you know what I mean. Mine's meat and potatoes, his is chicken," said Mayor Magers.

Mayor Brady walked away with the ax so-to-speak, a special plaque from TMC. His family's chicken soup sold twice as much as Mayor Mager's stew.