Battle of the Ax: Sherman's Week in Practice 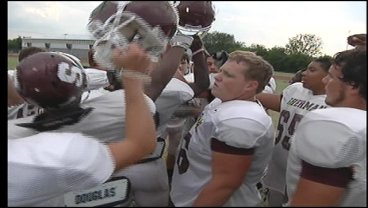 SHERMAN, TX-- Despite the records coming into Friday's game, for the Battle of the Ax, "the records are zero-zero when it comes to that game, 'cause you never know what the outcome can be," said Zachary Whitfield, Sherman's Running Back.

This is a historic game, dating all the way back to 1906, and it's the longest continuous rivalry among all high schools in the state of Texas. "In sixth grade all the way up to high school, we would always go to the Battle of the Ax games and go watch them, and we'd see stars like Waymon and other players making huge plays, and we'd always be like, we want to be that person when it comes our time, and our time has come and we just can't wait to go out there and play," Quarterback Thor Long said.

The Sherman Bearcats could easily come into this game over-confident, especially because of Denison's record so far this season, but all week in practice, Head Coach Gary Kinne says they've been working especially hard on keeping up the tempo on offense. When it comes to the Battle of the Ax, it's anybody's game. "You throw out the record in this game. In the Battle of the Ax, it doesn't matter what the records are: the team that wants in the most is going to win," said Kinne.

Last week, Sherman beat Royse City, but Coach Gary Kinne knows there were mistakes, and that's what they're focusing on this week in practice. "Reducing our penalties, cutting down on mistakes, no turnovers...I think the team that plays mistake free is going to be the team that comes out with the win," said Kinne.

"We came out a little flat against Royse City, but we'll make sure that won't happen again," said Nathan James, Sherman's starting Wide Receiver. This isn't just another district game, this is a chance to make history, and it's something the whole community can rally around.

"The town is definitely excited, they're just as excited as we are, and we can't wait to get the ax back, and that's our goal right there," said Long. A quick offense, avoiding penalties, and chemistry is what make this team great.

"I've been playing with most of these guys since Boys and Girls Club, so it's just connecting all the time, it's great to have a family as a football team," said James.

"We're always working afterwards, whether it's after weights or after practice, during the summer, spring, seven-on-seven- everything. And we have our timing down, as well as all the other receivers, and we just have faith in each other," Long said.

Faith, family, hard work and good 'ol fashioned football, everything the Bearcats bring to the Battle of the Ax.