Train and Truck Collide in Caney, Leaving One Man Dead 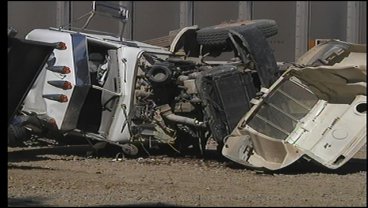 CANEY, OK--A train collision leaves one Atoka County worker dead. The man was on the job driving a dump truck, when his vehicle was hit by a train.

Two Atoka County dump trucks were driving on Folsom Road in Caney, OK around 9:00 AM Thursday. After crossing some railroad tracks, the driver of one heard a crash behind him. In his rearview mirror, he saw his coworker's truck crushed to mangled metal.

"It's just a tragedy--you now I don't know what to say or do. I feel sorry for his family," Clint Corites said, friend and coworker of Maxey.

According to Oklahoma Highway patrol, the train was traveling at about 55 miles per hour. The train conductor thought the truck had stopped, but that wasn't the case. By then, it was too late.

"The dump truck then proceeded to cross the train tracks and they hit him approximately in the center of the vehicle," Mitchell Patten said, Oklahoma Highway Patrol Trooper said.

After being thrown from the vehicle, Maxey was pronounced dead at the scene. His body is being examined in Tulsa. The train conductor and engineer were taken to Atoka County Memorial Hospital for minor injuries.

"It takes--I don't know the exact distance--but it takes over a mile going that fast for a train to stop if not more," Patten said.

This particular crossing didn't have railroad crossing flashers. An ODOT representative says it depends on a number of factors, such as traffic and visibility dangers, on whether or not to install them. The railroad company must also be consulted because they own the property.

Right now, Maxey's friends and loved ones are just trying to cope.

"Just really kind of numb--you know? Don't know what to think or do," Corites said.

It will be a morning that many Atoka County workers will never forget.

The cause of the crash is still under investigation. The mechanics of the truck--and the railroad crossing--are being examined.