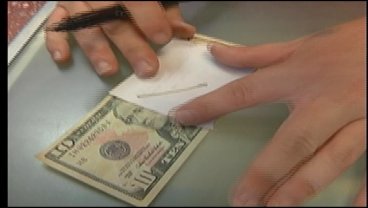 SHERMAN, TX -- More counterfeit bills are showing up in Sherman. Last week we told you about a suspect who tried to use a fake $100 bill to buy gas. Now police are investigating three more incidents. Deeda Payton reports.

Wednesday, three separate businesses reported customers trying to pay with counterfeit bills. Police say while the suspects may not think they're hurting anyone, it's the same as stealing. They might not realize it, but forgery is a felony.

Thursday, a clerk at a gas station near Walmart in Sherman reported a fake $100 bill. Police were called to investigate. Since then at least three more reports of counterfeit Benjamin Franklins have been called in to authorities in Sherman.

Police encourage business owners and employees to use counterfeit pins on suspicious bills and to check the watermark along with the numbers on the corners of the bills. They say many times fake bills will have different numbers in the corners than what the bill is supposed to be. For example, it may look like a $100 bill, but will have the number five in the corners.

No arrests have been made in these recent incidents, but police say they are following up on leads.