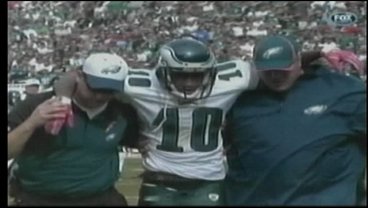 GRAYSON COUNTY, TX --  The University Interscholastic League or UIL is implementing new guidelines for players who have concussions during practices or games. As Deeda Payton reports, the new mandate takes effect Friday for all schools in Texas.

Football is known for long passes, speed and agility, but the sport is best known for aggressive tackling.  Recently, as seen in the Patriots-Ravens game Sunday though, the contact has become more violent and the trend is trickling down to the high school level. "I think there's times when the tackling's not great. The kids go for the kill shot instead of bringing their arms up seeing what they hit. A lot of times they see that in the NFL and it's cool and the crowd oohs and aws but at the same time it's dangerous for the kid tackling and it's dangerous for the kid being tackled," said Denison Head Football Coach, Cody White.

These crushing blows have prompted the UIL to implement new guidelines for managing head trauma on the sidelines. The head football coaches for both Sherman and Denison say they support it. "As far as the UIL policy goes, we've been abiding by what their new policy is going to be for a while," said White.

White says Denison has seen a rash of concussions, four this season, and he says he won't just remove a player from the game as the UIL would recommend, he will have them sit out for a week or longer depending on their condition.

Sherman has a similar policy. "If we think a player has a concussion, obviously he has some of the symptoms we have a trainer that'll evaluate them and then we also have two team doctors that are all inside at all our games and we turn it over to our medical staff," said Gary Kinne, the Head Football Coach for Sherman.

The UIL's guidelines are based off of how long a player exhibits symptoms. If cleared after fifteen minutes, a player may return to a game or practice. If symptoms last more than fifteen minutes or if a player has a history of concussions, they are required to sit out. "The fact of the matter is, kids are bigger, stronger, faster than they used to be and the nature of the collisions they're getting are probably a little more violent than what they've been in the past," said White.