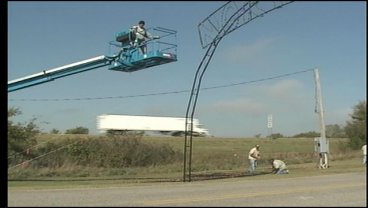 ARDMORE, OK-- For many families, visiting the local holiday lights display is an annual tradition, but have you ever thought about who's behind the big production and how long it takes to set up? We sent Meredith Saldana to Regional Park in Ardmore to find out what goes in to the festival of lights.

"We started out that first year with I think about 20 displays, 15-20. It was a small, small group," says Kevin Boatright with Ardmore Parks and Recreation.

Ten years and several hundred thousand dollars later, the festival of lights continues to light up the holiday's  for those in southern Oklahoma.

"We have a lot of people in the community that say every year their relatives look forward to coming to Ardmore because going to the lights is always a big thing," says Boatright. "So we're glad that, you know, it's kind of become a little thing, tradition for Ardmore and hopefully we can keep doing it."

The numbers for this display are staggering, more than half-a-million bulbs on nearly 130 displays and an electric bill averaging nearly $9,000, but the best part, anyone can enjoy it.

"Our whole theme, originally, was that we don't want any child or any family to not be able-- to not come through because of money. We don't want that to be an issue. So we've always done it donation only," says Boatright.

Clifford Ramon and Suzie McCracken have been there from the beginning and even though it's a tough job, the months of sweat and determination are soon replaced with joy and pride.

The festival, on average, raises about $40,000 to help local non-profits and fund next year's display.

This year's festival starts on November 20th and runs through December 30th.