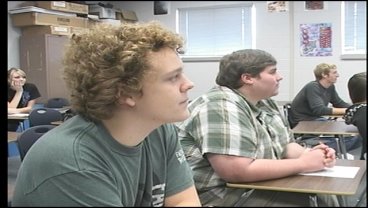 DICKSON, OK-- It's an inspiring story of hard work and determination  by a local high school student. He's being recognized for his academic success. Meredith Saldana has more on his story.

He's a senior at Dickson High School and he's only part of 1% of seniors, across the nation, who have been named 2011 National Merit Semifinalists.

Campbell's high school principal Larry Case says, "You know, I've been in education for 29 years and he ranks up there as one of the top students as far as academically. And he's just not all academics, he's quite a young man to deal with in and out of the classroom he's got a great personality."

Now, he's planning for the future.

A future he may not have had, had it not been for his hard work in high school.

"I'm planning on hopefully going to Brown University in Rhode Island," says Campbell. "You feel like when you first get into high school that it's not that big of a deal, cause it hasn't been up until this point, but once you actually start looking at colleges and everything you realize that you have to have a high GPA, you have to have a good test score. Everything about it is a lot more important."

With this big honor, for a student at a small school, officials hope Zak's hard work and determination will inspire others.

"You know, I think with Zak getting this, I hope it is a great message to the younger kids," says Principal Case.

As for Zak, the chance to move on is not only challenging, but exciting.

"I'm definitely ready. This year has been dragging. I'm ready to get out of here and take the next step."

Zak will find out after Christmas break if he made the list of finalists and he hopes to hear in mid-December if he's been accepted into Brown University.