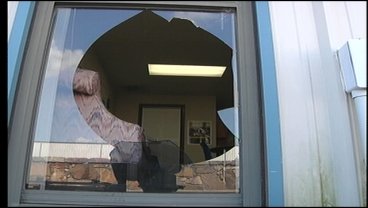 CHOCTAW COUNTY--Though the students have the day off at Grant-Goodland Elementary School, it's no vacation for the Oklahoma State Bureau of Investigation and the Choctaw County Sheriff. They've been at the scene most of Monday trying to assess the damage and figure out what exactly was stolen.

An elementary science teacher was getting ready for a lab Sunday night, but what she found ended up canceling class Monday. She found a broken window, open drawers and discovered supplies were missing.

"She had come up yesterday evening to get ready for today's lab and found that the room had been broken into and things were destroyed," Steve Allred said, Grant-Goodland Public School Upper Elementary Principal.

The Oklahoma State Bureau of Investigation, the Choctaw Sheriff's Department and the District 17 Drug Task Force were on site Monday investigating the scene. Two elementary classrooms and a science lab were broken into sometime over the weekend, according to authorities.

"In the science lab and science classroom, we had windows broken out and basically the room is turned upside down," Allred said.

Teachers are waiting for the sheriff's department to complete a tally of what was taken.

"We're missing some things from each classroom, so the administration is trying to get a list together with serial numbers on anything that might be on their inventory that's missing," Lewis Collins said, Choctaw County Sheriff.

With broken windows and shattered glass all over the floor, school administrators decided it was best to let the students stay at home.

"Teachers are still waiting to be released to go in those rooms to actually get a more accurate estimate," Allred said.

School officials and law enforcement aren't releasing what was stolen yet. Damages are still being assessed. The suspect--or suspects--could face felony burglary charges.

"We've been here for several hours," Collins said. "We'll be here until we get all the evidence collected and found."

The investigation is ongoing. Once the mess is cleaned, students can expect to be back in class.

If you have any information, contact the Choctaw County Sheriff's office.