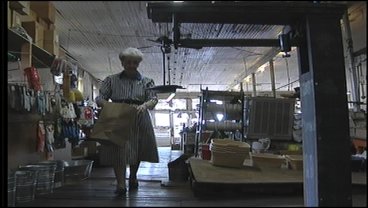 BONHAM, TX--A business almost as old as one Texoma city is closing its doors for good. A hardware store more than 100 years old is ready to retire.

More than a century ago, three settlers decided to open a hardware store in Bonham. 109 years later, the place is closing its doors.

Smith Moore Williams opened in 1901, and has seen the Depression, both world wars and the golden age. The current owners bought the place in 1972 from the Smith family. After nearly four decades, owner Lois Kennedy has decided to retire. Her son and co-owner Jeff wants to pursue other endeavors.

"Well, they've been a good 39 years," Lois Kennedy said. "We've of course gained a lot of friends and friendships and just have a lot of experience with customers both new and old.

Some locals--the Kennedys said--came in daily for the customer service and the shopping options that chain stores don't have.

"A lot of merchandise, you cannot get now that you use to," Jeff Kennedy said, owner. "Like lamp parts and all that is about faded away--and pottery--stuff like that [...] You can buy two screws or 3 nails instead of in a package or a box."

The uses for products--and their packaging--have changed dramatically over the years, said Lois.

"They came in here with their grandparents, with their parents and some of them would tell the story of how their mother would come in and buy feed sacks back then they would be in printed bags--cloth bags-so they could get enough material to make a garment," Lois Kennedy said.

The memories won't just disappear. The family is holding an auction Saturday November 13th to get rid of many original items from the store.