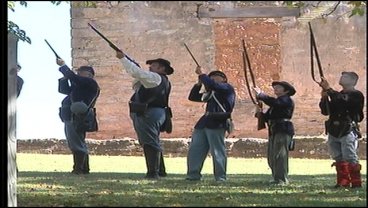 BRYAN COUNTY--After Fort Washita was lost to arson in September, people are trying to bring it back...by reliving history.

"But it doesn't have a projectile in it," Kenneth King said, "It's just rolled up paper. And it's just fires with a blank."

Reenactors from all over the country showed spectators how the civil war was done, one shot at time.

"We're shooting about 5 pounds of black powder so that's approximately 1/3 a stick of dynamite so we want everything to be safe, so we want to run our drill in a controlled safe manner," Tim Auld said.

There was one thing that the blue and gray had in common--they were working to raise money to rebuild the barracks.

"Today I'm the Yankees--you have the bad guys at some time or another  so we like to portray both sides because it shows an adequate amount of troops on either side," King said.

Medical personal were on site to aid injured soldiers... So they could be ready for the next "battle," and explain to passerby what exactly was going on.

"Recover quickly so that they can get up and enjoy the rest of the afternoon and also answer questions for you," Douglas Garnett said.

Luckily, no one needed surgery.

"Most people want to know how an amputation was performed, and we will go into detail on that--unfortunately sometimes too detailed and people get sick at my lectures," GARNETT said.

The fort is a special place for many of the reenactors.

The fire didn't extinguish their spirits. They're hoping the barracks can stand just as it once did.