Kingston Celebrates a State Title for its Marching Band 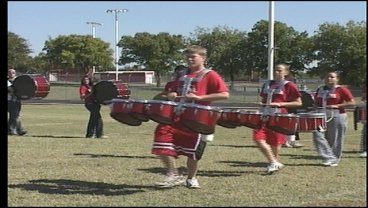 KINGSTON,OK--Students at one Texoma high school are celebrating a huge victory, but its not for their football team.

A week ago the Kingston High School band competed against other 2A schools at the state competition and tied for first.

Amazingly, this was the band's first time in the competition.

Band Director Eric Hall says his student's deserve the praise for getting through an intense competition.

"It really just has to do more with the way the kids prepare. There the ones that earned it," said Hall. "I just have the fortune of standing in front of them everyday."

"There were a lot of bands that we'd never seen before and so we didn't really know what it was going to be like, but it was pretty intense," said color guard and band member Peyton McCaleb.

The competition was held by the Oklahoma Association of Bands.

Kingston hopes to compete in next year's competition.