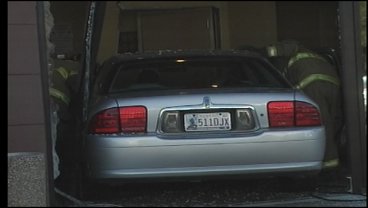 ARDMORE,OK--Diners enjoying their dinner got an unexpected surprise--a car that slammed into the KFC in Ardmore.

It happened on Friday afternoon around 4:30 p.m. at the restaurant on Holiday Drive.

Police say it appears the driver hit the wrong pedal.

Thankfully, no one was hurt, but the car came close to a few people.

"Felt like a bomb hit and when I turned around there was glass going everywhere," said eyewitness DeSean McGee

Another eyewitness, Doug Chapman said, "I just took one step to go get my Coke and had I not taken that step I wouldn't be talking to you right now."

Again, no one hurt in the accident.