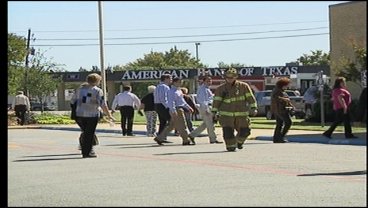 Around 1pm, the worker was digging a trench when he hit the gas line.  He went inside to inform bank officials who then promptly evacuated the building.  They then called 911 and Atmos Energy.  American Bank COO John Hubbert said, "Our employees did great.  We have procedures that we follow that they've been trained, so they knew to evacuate, where to evacuate and where they should report and so they all followed procedure."  Bank customer Marie Reeder had just gotten there when the commotion started.  "I thought 'oh my God' this is an exaggeration.  That is really what I thought.  Then I saw the panic and I thought we're fixin' to blow and we went out that door right there and we were just scattin'," Reeder said.  Crews were able to stop the leak with about 30-minutes and the bank reopened for business as usual.