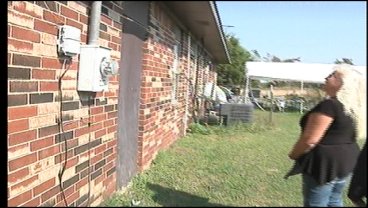 The phones lit up up like a Christmas tree just after nine Wednesday morning with people reporting something out of the ordinary around here, an earthquake.  Evelyn Rhodes has lived in Caney, OK for the last 24 years.  And Wednesday morning, well, let's just say it wasn't quite what she expected.  "I felt something real hard.  And then I looked up and saw my walls movin'.  I called a couple of people.  Then I called the Sheriff's office and they confirmed it was an earthquake," Rhodes said.  Seeing her walls move, Rhodes figured she better check for damage.  Added Rhodes, "I was scared.  I was scared.  I mean, I didn't know what happened.  I didn't know if somebody ran into my house accidentally and I got up and that's why I went outside and to see what happened and I didn't see no damage."  Over at the Office of Emergency Management, Director James Dalton worked on compiling the reports and sending them to the State Office of Emergency Management in Oklahoma City.  Dalton said, "A lot of times our phone lines will get flooded and they will at the communications center and we were talking back and forth with them and comparing the information and again, as I say, I was on the phone with the state office."  Both agreed, they're just thankful it wasn't worse.  Rhodes said, "I was very thankful that we didn't have no damage and I hope nobody else does too."  Added Dalton, "No damage reports at all.  The only thing we got was windows rattling, picture frames rattling but no damage that we're aware of."  A couple of interesting facts, 42-years ago Thursday, an earthquake hit Durant causing minor damage.  And the strongest earthquake in Oklahoma state history is a magnitude 5.5 that hit El Reno in 1952, making today's 5.1 the second strongest in Oklahoma history.