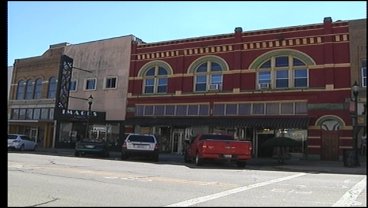 DENISON, TX -- It's no secret that Denison's downtown area has been struggling these past few years, but the city has high hopes that their new main street director can wake up the sleepy street. Deeda Payton spoke to Donna Dow about her second week on the job.

If you drive down main street in Denison, you'll see classic architecture, park benches and small town staples, but it's hard to see the city's downtown charm for all the for sale signs. That's why the city hired Donna Dow as their new main street director. Her first day was October first. "It's been crazy. I'm trying to get to know everyone and trying to visit the business owners and meet them and that's going to take while because there's a lot," said Dow.

Dow and I took a walk through her new stomping grounds so-to-speak and while she isn't completely settled in yet, she says she already has some ideas of how to wake up this sleepy area. "One thing that I want to do is the vacant store fronts. I think maybe get some decorations and make them look more marketable and so i've been talking to some people about that and maybe have a decorating contest that will get a lot of people involved," said Dow.

Those that work on Main Street say that they just wish the local community could look past these for lease and for sale signs and empty store fronts and really see what Main Street has to offer and they believe Donna Dow is the person that can breathe new life into this area.

Dow knows this street isn't going to be an overnight success story, but she says she can see the fabric for future growth in the colors, in the wide streets and in the people that believe it can be the heartbeat of the city.