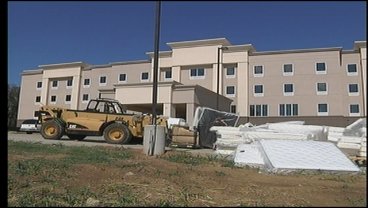 DENISON, TX -- Work has resumed on the long-abandoned hotel next to Utter Ford on Highway 75 in Denison.

Crews are finally back at work on that hotel along Highway 75.  They're busy putting some of the finishing touches on the project that started more than two years ago.  Tuesday, they were busy hauling mattresses inside the facility.  Anna McKinney, President of the Denison Chamber of Commerce, says she's heard the project should be complete in the next couple of months and then open sometime shortly after that.  When asked if she thought this area could handle another hotel given the current economy, McKinney said "absolutely!"  "Right now we have a lot of lodging facilities.  But the good news is that our occupancy is up.  We have collected, in the first two quarters, $1.5 million in occupancy tax.  So that is excellent.  It's up over $200,000 from the same period last year," added McKinney.  No word yet what brand name the new hotel will carry.