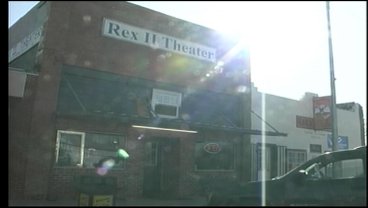 CADDO, OK - It's a true Texoma treasure and one of the last of it's kind. The single screen Rex II Theater stands in downtown Caddo, Oklahoma - combining an old-time atmosphere with new movies. But as KTEN's Katy Blakey explains it's not just the movies that keep patrons coming back week after week.

The Rex II Theater stands where the original Rex Theater showed movies for decades. It's where Hal Nesbitt spent his Friday nights.

Now he's doing it again except this time as owner.

You would think the best thing about owning a movie theatre would be watching all the new releases but Hal says it's the stories off-screen that make it worthwhile.

"Old ladies will come in and say they had their first kiss here when they were a young kid going to school," said Nesbitt. "I've heard a lot of those. I sat with so-and-so and sat in the back. It's neat."

The Rex II is all about making memories. It's more than just a place you go to see the stars. You become the star. First-time visitors get to sit in the original theater's seats, get their picture taken and leave their permanent mark on the wall.

"The reason we did that I found some writing on the walls inside here and underneath the tables and stuff and I thought, shoot - let's just do that."

Thousands of names now serve as wall-paper. Rows of photo books are filled with people's first dates, their birthday parties or their first trip to the Rex II. One example involves an older gentleman who's first and only visit to the theater was to watch "Dude, Where's My Car?". The sole reason was because it had his name in the title.

Groups of school kids often fill the theater taking in a matinee. Locals will come for some popcorn or stop by for a quick game of cards. Few leave without talking about old times or searching for their name on the wall.

Focusing on more than just movies may have helped the Rex II survive. Few one screen theaters exist today.

"Ah, because it's tough business. It's hard to make it. It really is."

Yet - movie-goers keep coming back.

"Hopefully Hal will keep it another 10, 20 or 30 years," said Austin Hider, a frequent movie-goer.

Around $8 will get you the movie ticket, a bag of popcorn, a drink and a box of candy. For a list of show times and to learn more about the Rex II visit their website: http://www.rex2theater.com/