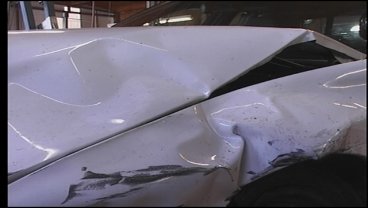 MURRAY COUNTY, OK-- A Sulphur police officer is lucky to be alive after a weekend car accident  involving a suspected drunk driver.

The accident happened at Broadway and West 14 Street in Sulphur.

Police say the drunk driver swerved into the oncoming lane and hit the police cruiser nearly head-on causing the cruiser to hit a telephone poll.

The officer was only treated for minor injuries, even though the front airbag did not deploy.

Sulphur Police Chief David Shores says, "We're really fortunate that, you know, the officer or the suspect, either one, was not seriously hurt in this accident."

Shores says the cost to replace the car and damaged equipment is about $20,000.

The driver of the car who hit the officer has been charged with aggravated DUI.