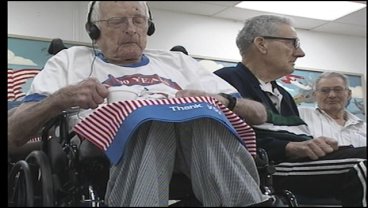 ARDMORE, OK-- Ever had an idea or dream of doing something for others? A group of women in southern Oklahoma made their's a reality. Meredith Saldana met with them and has more on this story.

Vickie Luster of Tishomingo, Oklahoma went to bed one night and had a vision.

Over the last few months, Operation: Sweet Dreams was born.

Luster and some of her friends, including Cheryl Turner of Ada, devised a plan to construct enough handmade pillowcases for all veterans residing at Oklahoma Veteran's Centers in Sulphur and Ardmore.

But why a pillowcase you may ask?

"A pillow is the one thing in combat that a veteran does not have. And this is a comfort item that I felt like they would realize the symbolism of it and appreciate the fact that they can lay their head on red, white, and blue every night," says Luster.

The group who made more than 400 pillowcases says seeing the looks on the veterans faces, made it all worth it.

"We are honored, we are honored to be able to do this, to sew these pillowcases and then to present them to the veterans here. We don't want anybody, any veteran, to ever feel that they've been forgotten," says Luster.

Veterans tell us they were excited to receive them.

"These took a lot of effort, I can tell and I'm glad to have mine and I definitely do appreciate it," says Veteran David Surey.

"It's already on my pillow," says Rocky Dean. "The first thing I did was go put it on my pillow because I never want my bed to be without one."

These pillow cases took months to hand make and lots of time and effort, but perhaps the thought is what means the most to these veterans.

"It means somebody out there does care and they do remember us," says Alice Christensen.

Dean adds, "Thank you, very much."

Vickie Luster has a challenge to our viewers who live in communities with veteran's centers.

She's asking that they pick a project and do it for the veterans.