Safety Advised to Both Veteran and Novice Gun Owners 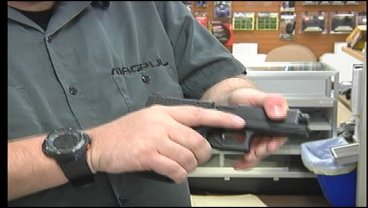 GRAYSON COUNTY--Experts say whether you're a veteran or novice gun owner, it's important to know how to maintain and lock a firearm. Simple negligence or mishandling a handgun could be fatal.

Police think a fatal shooting in Denison over the weekend could have been an accident. The case is still under investigation. Even though the cause is unknown, the tragedy is a reminder to play it safe with firearms.

"Basically what it comes down to is you should treat every gun as it is loaded---even though you know that it might not be. You always need to clear them and that's where a lot of accidents happen," Jason Webb said, Red River Firearms owner.

Simple precautions might prevent these deaths. It starts with emptying the magazine to a handgun and making sure the chamber is empty. Owner of Red River Firearms Jason Webb says to point the gun away from anything you don't want damaged, just in case a bullet accidentally got caught in the chamber.

"There are situations where people will actually go out and purchase a gun--just like people that are new to driving and within three months they're an expert. It's the same thing with firearms," Webb said.

Federal and state laws require firearms to not be accessible to minors. To be safe, make sure the gun isn't loaded and a safety lock handy to make sure no accidents can happen.

Webb suggests taking a concealed handgun class if you own a gun and have never shot before, or haven't shot in a while.

He said it's also important to know how to maintain and take apart the weapon so it doesn't lock up during fire.

"Get some proper fire arms training, instead of just purchasing a gun, throwing it under the seat, then you know, because you see what's in Hollywood," Webb said.

According to a National Vital Statistics report from 2002, nearly 800 people died that year from "accidental discharge" from a firearm.