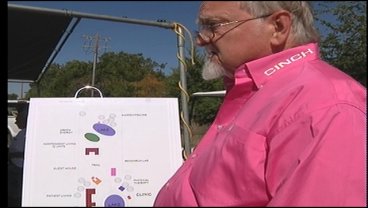 WHITESBORO, TX--After the loss of his son to severe brain injuries, one Texoma doctor is working to make sure other patients don't have to suffer the same fate. His vision may not only bring jobs to one town, but could save lives.

Sean Galewaler was in the back seat of a car, early one morning in 1997. It would be the last time that his brain would function normally.

"At 2:30 in the morning, I got a knock at the door. 'Your son has been seriously injured--we're care flighting him--he's being care flighted to Dallas to Methodist hospital," Dr. John Galewaler said.

Sean recently passed from his traumatic brain injuries. His father Dr. John Galewaler is now working to give hope to patients who suffer the same condition his son did.

"I rejoice, because God gave him to me for 12 1/2 years and I learned so much about brain injury and how to really take care of these people," Galewaler said.

An empty Whitesboro field will soon be home to The Brain Injury Centers. Galewaler and supporters are trying to raise enough money to make it possible.

"It's something that's needed," Galewaler said. "You know when 1.4 million traumatically brain injured people per year--and 1 in 20 get adequate care--that's a shame."

Galewaler said it could take up to $12 million for his vision to become a reality. He's hoping the project can start within a year.

"We want the people that nobody else can get results with because we plan on getting results," Galewaler said.

His son's spirit, Galewaler said, gives him hope--that can be passed along to those who think they may have none.