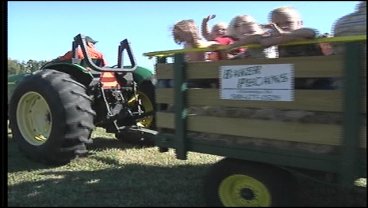 TISHOMINGO, OK -- Baker's Acres Pumpkin Patch in Tishomingo is now open for the second year in a row. Deeda Payton reports on what to expect if you take the family to visit.

Kids can bathe in corn, take a hayride through the pumpkin patch and even pet a few barn animals. Baker's Acres is basically a themed recess for kids.

If it reminds you of fall, you'll find it at Baker's Acres in Tishomingo, Oklahoma. In it's second year, the owners say it's even bigger and busier than before. "we try to make it all about the kids," said owner, Jackie Baker.

The pecan farm transforms in the fall into a pumpkin patch palooza. "Well we've been to lots of pumpkin patches I've been teaching for 12 years and each year we take them to pumpkin patches and this is by far the best," said Vanoss teacher, Beth Walker.

It's a big hit with the kids. "I am having fun," said 4-year-old, Quinn McCoy. "They love it. They've been so excited. One little boy had a birthday yesterday and he wasn't even as excited about his birthday as he was coming here," said Walker.

"I did the ducks, the slide, the cars, the hayride," said kindergartner, Scotland Hatton.

While the hayrides are a must at baker's acres, it's the games and play areas that seem to get the most attention. "The duck race is a big hit. The corn bin just blows my mind that they love that corn bin. They can just play in that for hours and I'm thinking what a cheap toy that could be for parents if they could just buy their kids a corn bin," said Baker.

It may sound corny, but these bins are a lot cheaper than a petting zoo which is also a pretty popular stop on the tour of the property, and chickens and bunnies may not be the typical go-to animals for fall, but it doesn't seem to phase these kids.

The owners say they never get tired of seeing the kids faces light up when they see or try something for the very first time. "I think it's the smiles and the memories they're making. They can go back and remember going to the pumpkin patch when they were a kid," said Baker.

Baker's Acres is open weekdays by appointment for school groups and weekends for families. Weekend hours are Saturdays 10am-6pm and Sundays 1pm-6pm.