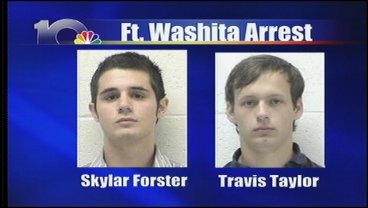 A national landmark is gone, after three suspects were allegedly drinking and ghost hunting before dawn on September 26th.

"Sad, simply because they have took so many memories away from many people that have been calling and coming in and stopping by," Marie Brearley said, Fort Washita Volunteer.

The three suspects say they learned the next morning that the fire they had lit the night before had turned into a crime scene. After that, suspect Brandon Perkinson stepped forward. The Bryan County District Attorney says that the suspects have cooperated with authorities.

According to the affidavit, Brandon Perkinson, Travis Taylor and Skylar Forster were ghost hunting when they decided to light a fire with toilet paper in a fireplace on the west side of the fort. Perkison claims to have tried to put out the fire with cleaning materials.

The suspects say they left the scene shortly afterwards, not knowing that their small fire would engulf the building.

A fort volunteer says she couldn't believe what she saw the next morning.

"They would come in and either start crying or come in very upset over what had happened," Brearley said.

Since then, Fort Washita and Bryan County citizens have mobilized a fundraising effort for the fort. They're planning on a benefit to be held at the fort this November 13th.

"I think that everyone is very sincere and they want to see it rebuilt as soon as possible," Brearley said.

What was destroyed overnight may take several years to rebuild.

Skylar Forster and Travis Taylor were released from jail on $10,000 bonds each. They are charged with second degree arson. Both could face up to 25 years in prison and fines up to $20,000.

Brandon Perkinson has been released from jail on personal recognizance. He was charged with a misdemeanor of breaking and entering a dwelling without permission. He could face up to a year in jail and pay up to $1,000 in fines.