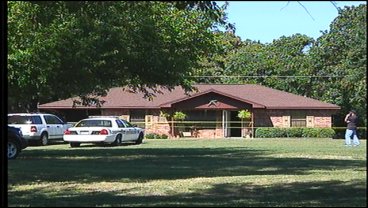 FANNIN CO., TX -- Officers serving a search warrant at a Fannin Co., TX home came under fire Thursday morning.  When it was over, the suspect was dead and no officers were injured.  KTEN's Chris Severy reports.

Just before noon Thursday morning, officers were attempting to serve an arrest warrant at a home on North Shore Drive, near Lake Bonham.  According to police, the suspect, Christopher Ramquist, picked up one of his guns.  Officers tried to get the gun away from him but weren't successful.  They say Ramquist opened fire on the officers.  They returned fire, hitting and killing Ramquist instantly.  Neighbor Kevin Peterson was shocked.  He said, "He really kept to himself and he was always out mowing his yard and we'd stop and talk and chit-chat, but other than that I didn't really know him personally."  Texas DPS Trooper Mark Tackett said it's an example of why even the most routine police activities often aren't.  "We serve warrants every day, thousand upon thousands of warrants and when we go into a house you never know what's going to be in there.  It's the same as walking up on a car you don't know what's in there.  Once a person feels that sometimes that they're going to be subject to being arrested, sometimes things can go south in a hurry," added Tackett.  The Texas Rangers are investigating the shooting.