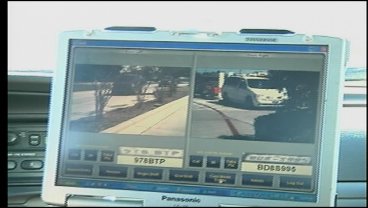 SHERMAN, TX -- The Sherman Police Department has a new tool to help them find everything from missing persons to stolen vehicles. It's called an Automatic License Plate Reader. Deeda Payton reports.

Thanks to a grant, Sherman is one of the few departments in the state to have this technology. It not only helps them get criminals off the streets, but it alerts officers of who they are passing or pulling over for a traffic stop before they even get out of their patrol car.

Sherman patrol units have more than just lights and sirens on their roofs, they've got cameras. "Basically you've got the four cameras that are on our cars and they run all the time run at a 360 degree angle," said Cpl. John Kennemer.

The cameras can scan thousands of license plates a day. "It alerts me that that vehicle back there is stolen," said Kennemer.

Kennemer says he knows this alert is false, which can happen, because the automatic license plate reader takes pictures of license plates and then suggests what the tag number is. Sometimes it can read the image incorrectly, but more often than not, Kennemer says it's spot on. "It gives us the opportunity to run more plates than any human being could run in that amount of time. In an average shift, I run about 2,000 plates," said Kennemer.

The system can also work in reverse. "If I wanted to look for a certain vehicle I could go ahead and input that vehicle as a target vehicle and as i'm driving around on a regular basis if it picks up that target vehicle it'll also give me the GPS coordinates as to where that vehicle is at," said Kennemer.

This technology can not only track down criminals, but it can be used in coordination with amber and silver alerts to find missing loved ones.

Since the cameras are scanning 24-7, if there is a report filed on a vehicle in Sherman, the chances of finding it increase exponentially. Police say they've already recovered at least one stolen vehicle.

The automatic license plate reader can also scan for specific uses. For example, registered sex offenders. That way officers can drive through a school zone or neighborhood and make sure there are no sex offenders nearby.