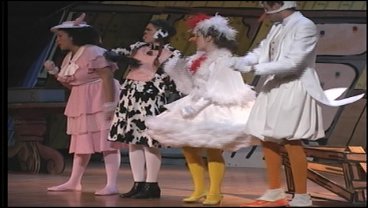 ARDMORE, OK-- For kids, seeing one of their favorite books come to life on stage as a musical is something that happens in their dreams. Thursday was an exception as some Texoma kids were treated to just that and it's all thanks to a non-profit organization. Meredith Saldana has more on this story.

Giggle, Giggle, Quack is a popular children's book and Thursday the nationally acclaimed Dallas Children's Theater was in town performing for Texoma kids.

Thursday morning, more than 350-elementary students from schools like Wilson, Ardmore and even Springer, took a field trip to the Goddard Center to see a special musical.

"We rode on a bus to Wilson to Ardmore to see the play," says student Mattison Mcmahan.

The Goddard Center uses donations and grants to bring in nationally acclaimed productions that children may not otherwise have the chance to see.

After the recent school budget cuts, teachers say local field trips like this, are the way to go.

"It's very exciting. They're excited, we're excited," says teacher Stephanie Ferguson. "This is our first field trip of the year, we don't get to take very many field trips."

The children have been reading the book in school and say now, they're excited to see the characters come to life.

"The duck was always getting in trouble. I think it's gonna be funny," says Wright.

Teachers say it's not only fun, but also part of the learning process.

"It's really exciting to read the book during the week and see their reaction and then to talk about it after we get home is going to be really, really fun," says Ferguson.

The Dallas Children's Theater will be performing the musical again, Thursday night at 7 o'clock.