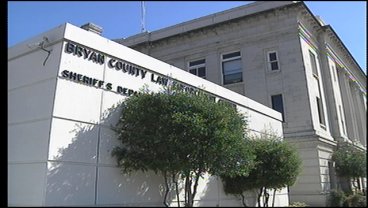 On November second, Bryan County voters will either vote yes or no to moving a portion of the sales tax revenue from the general fund toward remodeling the jail. It it passes, the jail will be ready by the fall of 2012 and the auxiliary jail will close for good.

Bryan County leaders have drawn up plans to expand and remodel the main jail. First, they need the voters approval to reallocate a portion of the county's sales tax revenue to pay for the estimated three million dollar project. "What we want to do is ask the people of Bryan county to dedicate it for a specific use which is to build a new jail facility and provide additional parking to the Bryan county courthouse. We want people to tell us that's what they want to do," said Bryan County Commissioner, Monty Montgomery.

In 2007, voters approved using a third of the sales tax revenue to fund jail operations and to pay off debt from remodeling the jail six years ago. Now that the debt is paid, that portion of the sales tax is going into the general fund and county leaders are hoping that residents will vote to put that money toward another remodeling project of the main jail. "If you vote for this and it passes it won't increase nor will it change the current tax rate in Bryan County. It will stay the same no matter how they vote," said Montgomery.

County leaders say if the proposal passes the auxiliary jail will close which they say will trim the operating budget by 25% each year. "We're hurting. We're working two jails. The expense is unbelievable when you have to operate two different facilities so we're looking at down the road saving money, adding more space and making it a much more secure place for having inmates," said Sheriff Bill Sturch.

Jailers believe the upgrades are necessary for their safety and the safety of the inmates as the population continues to grow. "More security, more space, less compromises, less confrontations. It's just going to be more beneficial all the way around," said Jailer, Bonnie Murray.

It's a simple yes or no vote that will change the way Bryan County handles inmates over the next decade.

Once again, if the proposal passes, it won't increase taxes. If it fails, it won't decrease taxes either. It just gives county leaders approval to move the money around.