Family Hopes to Get Home Before Christmas, Thanks to Habitat - KTEN.com - Texoma news, weather and sports

Family Hopes to Get Home Before Christmas, Thanks to Habitat 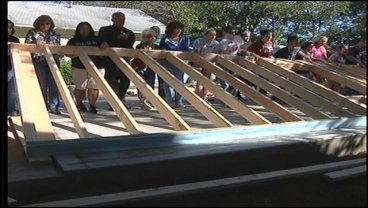 SHERMAN, TX--It's the ultimate holiday gift. Grayson County's Habitat for Humanity broke ground for it's 22nd home. For this family, it's the first one they can call their own.

Angela Lindsey and her daughter sleep in the same room. By Christmas, they may no longer have to.

Grayson County's Habitat for Humanity raised the wall for its 22nd home Saturday. The future walls will separate the bedrooms of Lindsey and her kids.

Lindsey has helped build two other Habitat homes. She's now working on her own, which she hopes will be completed by December 19th.

A former renter, Lindsey's excited to finally have her own lawn. She plans on her son to do the mowing.

The foundation is a new beginning for Lindsey.

"Not a home of our own," Lindsey said. "We've always rented, so we'll be real excited."

The Christmas present for this family won't be able to fit under a tree. Instead, they'll have to put the tree inside.

Lindsey said she's spent the past two years investing more than 100 hours on other Habitat homes. Habitat for humanity plans on dedicating the home after its completion Sunday December 19th.