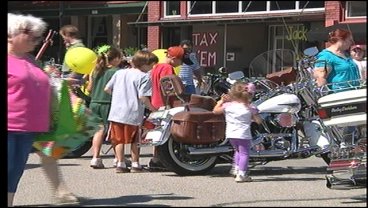 DENISON, TX--A festival to celebrate the season and what Texoma has to offer was held in downtown Denison Saturday.

The Denison Chamber of Commerce hosted the 23rd annual Fall Fest. Many Texomans say the beautiful weather and the food aromas brought them out.

"We was out riding a motorcycle and the weather is so nice and pretty and we remembered," Don Bedell said. "We hadn't been down here in a couple years, and we like it."

"Well according to my wife Katherine, it's the antique stores but I'll have to go with some of the galleries--some of the woodwork and some of the paintings," Mitchell Maire said.

"I love Denison," Ellen Melson said. "It's our hometown, and I am hoping and praying for big things to happen for this city."