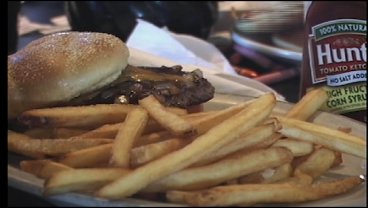 ARDMORE,OK--In Ardmore, fans took part in one of the many "bevo bashes" along Interstate 35.

Its a tradition for the Prairie Kitchen in Ardmore.

The restaurant actually is calling every burger it sells a "bevo" and they're a dollar off this weekend.

One reason it's a tradition is the restaurant's owner, Phil Tabor, is a former Sooner football player and he says even the Texas fans enjoy it sometimes.

"Oh they think its funny most of the time so, you know, its just in jest, its fun and our wait staff has a fun time with it," said Tabor.

"Yeah we've got a lot out already. Everybody that tries them likes them. Its really good, so you can mess them up, fix them up however you want them," said waitress Ali Cottrell

Tabor says his business actually goes up about twenty to thirty percent during OU-Texas weekend.