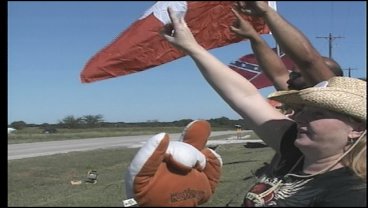 COOKE COUNTY, TX-- It's a battle for bragging rights, between the Texas Longhorns and the Oklahoma Sooners. The caravans are in full gear from Norman and Austin, the destination is Dallas, Texas and the Cotton Bowl. This year, as sooner fans crossed over into Texas, they were met with some serious burnt orange and longhorn pride. Meredith Saldana has more on this story.

That's right, it's all about the bragging rights and this group of fans aren't afraid  to cheer on their team, even if it means catching grief from sooner fans.

"Well, it started with about 3 of us and we were on the fence line watching traffic go by and we just decided that the next year we'd have a - make a party out of it," says property owner Mark Serna. "So we've been doing it for the last 6 years."

You can find the rowdy bunch of Longhorns just off of Interstate 35 south of Gainesville, taunting and egging on drivers headed to the game.

While there were just a handful Friday morning, every year they have at least 150-people cheering on the longhorns.

"It's better on Sunday," says Serna. "We shut traffic down last year for 37 miles and had a 9 car accident in the next county. The highway patrols didn't appreciate that last year."

The big bash is held on Mark Serna's property.

People camp for the weekend, watch the game and they even have a live band Saturday night, but police have already warned the Longhorn fans this year.

"Yeah, I've had one come by, matter of fact, yesterday and told me that nobody could cross the fence or they'd go directly to jail," says Serna.

Beverly Gawne has attended the party for the last few years, "When I first started coming it wasn't quite as extravagant as this, but each year it's just gotten bigger and bigger and it's just awesome."

We even found a sooner fan in the mix.

The brave man's name is Travis Davis, "I don't know, they say I'm crazy. You know they give me a hard time and I give it right back to them."

And these front yard tailgaters plan year round for this weekend.

"We take two vacation days off," says partygoer John Villanueva. "Instead of using them to go to Hawaii or whatever we save them for this day inparticular."

Perhaps the most exciting part of the weekend, the trash talk.

"The best thing about it is whenever the longhorns beat the Sooner's and they have to come back through here and we get plastic bottles chunked at us and everything like that," says Villanueva.

Their party lasts until Monday.