Fishing Report: Who has better fishing? Texas or Oklahoma? 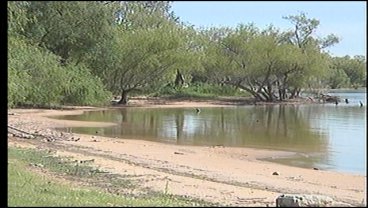 FISHING REPORT - With the eyes of the college football nation on the Cotton Bowl for Saturday's Red River Rivalry - our fishing reporter Lynn Burkhead got to thinking. Who has better fishing? Texas or Oklahoma?

Thinking about which side of the Lake Texoma, the two-state reservoir that the two sides share, has the better fishing?
How do you answer such a question?
How about numerically?
On the record side of things, Texas has a largemouth lake record of 11.82-pounds caught in 2000. The Texas side small mouth bass record is 7.06 pounds, caught in 2006. And the Longhorn side's striped bass record is a 35.12 pound Bevo of a bass caught in 1984.
And then of course, there is the matter of Splash, the 121.5 pound blue catfish caught on the Texas side in early 2004. Splash, of course, was an International Game Fish Association world record for a couple of years.
What about the Sooner side of Texoma? To start with, the Oklahoma side small mouth bass record is a 2003 bruiser that weighed 7.8 pounds, more than a half-pound more than the Texas side record.
But the largemouth bass record on the Oklahoma side of Texoma is 11.2 pounds, a 2009 fish that is mere ounces below the Texas record. And the blue catfish record on the Oklahoma side of Texoma is 118 pounds, a 1988 bruiser that is about three pounds less than the Texas side.
And what about the Sooner side of Texoma's striped bass record?
Well, this might be the difference maker. While Oklahoma started the stocking of Texoma's famous linesiders back in the 1960s, no striped bass bigger than the Texas side record has ever been landed.
And that means this...that just like the Longhorns 59-40-5 series advantage against the Sooners on the gridiron, the Texas side of Texoma is just a bit better than the Oklahoma side.
Just like the Longhorns will be a bit better in the Cotton Bowl tomorrow afternoon.
I hope.
For KTEN News, I'm Lynn Burkhead.