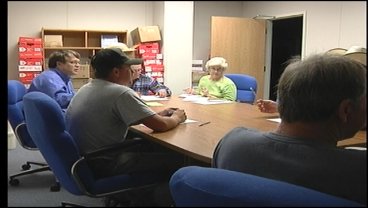 After allegations of mismanagement, Charles Caughern has resigned. Effective immediately, he is no longer Achille School District's superintendent. The school board unanimously approved his resignation. High School Principal Rick Beene will be taking on the superintendent's duties starting Friday.

"I heard that Mr. Caughern--the superintendent--was not here no longer and I come to see if he was gone and who took his place," Haskell Ames said, citizen.

"I'm going to do both--you know as most Oklahoma schools are having financial cuts--we're in good shape--but at the same time we want to save as much money as we can so I'll be doing both positions at least for the remainder for this year," Rick Beene said, Achille High School Principal.

Caughern will be finishing his contract so he can retire. He will continue to be paid his superintendent salary working as an off-site administrative assistant until March 2011.

The principal will not be paid a superintendent's salary until Caughern's contract expires next year.