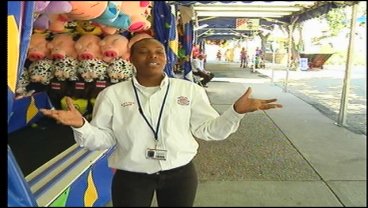 "OU represents every year, and we're very excited about that, I love to see the crimson" said Oklahoma native, Terry Price. This weekend, the fair will be full of people trying the fried foods as well, and vendors have to be ready for the big crowds.

"We get here about eight o'clock, but we probably won't leave till twelve, one o'clock in the morning," said food vendor Gigi Bizell. "I tell everybody else, if you're not in college, stay away from the fair that day. It's a lot of fun but it's overwhelming.," said Jake Levy, Desperado's Mexican manager and fried margarita vendor.

The Red River Rivalry brings big bucks to the local economy, but the fair is about more than just food and football. Kids from all over the state, including Texoma, get to show off their hard work at the livestock shows as well. "There is a lot of preparation coming in here, you have to work with your hogs, and you have to know what you're doing when you come down here and not just wing it. It's a lot of fun, because you see all these people coming down and looking at your hog, and it feels great coming down here every year," said Van Alstyne FFA member Kamy Green.

It's a busy weekend for fair-goers, and it will only get busier for the big game.