An Employee of the North Texas Regional Airport Retires After 39 - KTEN.com - Texoma news, weather and sports

An Employee of the North Texas Regional Airport Retires After 39 Yrs. 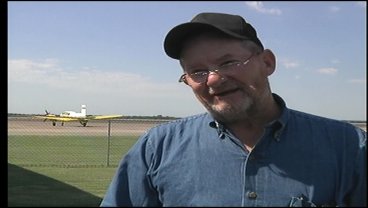 GRAYSON COUNTY, TX -- A staple out at the North Texas Regional Airport is calling it a career. Gilbert Elliot spent 39 years as a maintenance worker. On Thursday, a special going away party was thrown in his honor.

The airport has been Gilbert Elliott's office for the past 39 years. Well, he has a real office, but he's not the kind of guy to sit behind a computer all day, just ask him. "You know I'm just basically a country guy. I'm well at home working. A lot of people like to be outside. I'd rather be working outside on a piece of equipment or something," said Elliott.

Elliott is the director of maintenance for the North Texas Regional Airport, until now. He has decided to retire. "After you get a little older you have to slow down," said Elliott.

His co-workers say they're really going to miss him. "I think he's a wonderful man. He's been great to work with and I've really enjoyed working with him the last five years."said Tony Latona. "It's going to be a hard job to fill," said Scott Ford.

Elliott started at the airport when it was still Perrin Air Force Base in 1971. In the past three decades, he's seen a lot of change from the building of the new fire department to the remodeling of the control tower. But, he says he still expected more. "When they built DFW they closed down Greater Southwest Airport and I thought this was going to be a reliever for that area and it still will be but it's just not going as fast I thought it would," said Elliott.

He says he has high hopes for his "office" so-to-speak and knows that when it comes to this place, his home away from home, he knows the sky's the limit.

Thursday was Elliott's last day at the airport, but he says if anyone needs him he'll be around to lend a helping hand.